Save on your Auto Insurance with the Three P’s

Winter weather is upon us and once again we need to relearn how to drive on snow and ice. Drivers are more likely to get into an accident during the first snowfall of the year compared to all other snow days, according to a University of Michigan study. The National Highway Traffic Safety Administration advises the three P’s of safe winter driving:

A good way to prepare is to practice safe winter driving. We all may be guilty of complaining about other drivers who “forget how to drive” on ice and snow. Don’t be that driver! In the daylight, rehearse maneuvers slowly on snow in an empty lot. Remember to steer into a skid. If your car has anti-lock brakes, stomp down firmly on the brake. Anti-lock brakes automatically pumps the brake to prevent them from locking up and acting like a sled runner. If you don’t have anti-lock brakes you need to pump the brake manually up and down to slow the car without going into a full slide.

Maintain your car. Check the fluids, test the battery and check tires for wear and proper inflation. Keep an emergency road kit in your car along with extra clothing, blankets and first aid.

Protect yourself by buckling up before putting your vehicle into gear. Sit at least 10” back from an airbag. Use child safety seats and make sure they are properly installed. Children are safer in the rear seat.

Prevent crashes by staying, getting plenty of sleep and avoiding drugs or alcohol. alert, avoid distractions while driving such as texting, adjusting the radio or GPS. Above all be a courteous and patient driver. That’s easier said than done so practice patience everyday!

Related: How to Save Money on your Auto Insurance 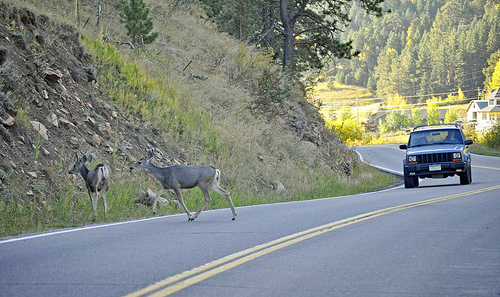